Fastlane Integration for Continuous Delivery in an iOS Project

By App DevelopersNovember 15, 2016 No Comments

This is the 2nd part of our series of “Continuous Integration and Delivery for iOS using Jenkins and Fastlane”. Check below links for the 1st and 3rd Parts

Fastlane is a suite of tools that simplifies the process of deploying an app by automating tasks like generating screenshots, code signing, and releasing the apps to app stores. Custom build tasks called ‘lanes’ can be created using fastlane, which work in a sequence to perform tasks like running unit tests, static analysis, code coverage, building the .ipa or .apk files etc. Fastlane allows developers to deploy an app to the stores with the single push of a button, easing  the process of releasing frequent smaller updates.

Fastlane, when combined with the pipeline job configured in Jenkins using Groovy Script, makes the development and deployment process smooth.

We can install the Fastlane with a simple command. Open the terminal and type in

It’s going to take some time, as it needs to download lots of files.Note: Fastlane requires Ruby 2.0.0 or higher version. Make sure it is already installed on the system.

Steps to initialize Fastlane in the iOS project:

1. First, we need to setup a new ‘private’ Git repository, which holds our certificates and provisioning profiles for development and distribution of the application. Team members should be given exclusive access to this repository.

2. Once we have our private Git repository setup, we need to execute the below command in the terminal. This will check for any existence of public key within ~/.ssh/ folder

(replace the email id with your Git email id. If it asks for any file name, hit enter multiple times.)

3. Skip this step if you already have a public key.Execute the below command and copy the entire public key (including your mail id)

4. Login to your GitLab account and go to your profile settings. Here, you will have a space to store your SSH keys. Add the public key copied from the terminal and give the SSH key a name and click on ‘Add Key’.

5. Come back to your iOS Project and open it in your Xcode. We need to make some changes in project ‘schemes’, so that the entire team share  single scheme instead of each member having their own set of schemes on their developer machines.

We will also create separate schemes for Unit Tests and UI Tests targets that can run independently on a CI Server or a development machine. In new scheme window, select your Unit Test target from ‘Target’ drop down and create a new scheme with any name.

Click on ‘OK’ to create the new scheme. Follow the same procedure to create another scheme for UI Tests target.

We now have following three schemes ready to be shared with the team:

Click on ‘Manage Schemes…’, refer to the  above figure and make sure all the schemes you have created are selected in the ‘Shared’ column. 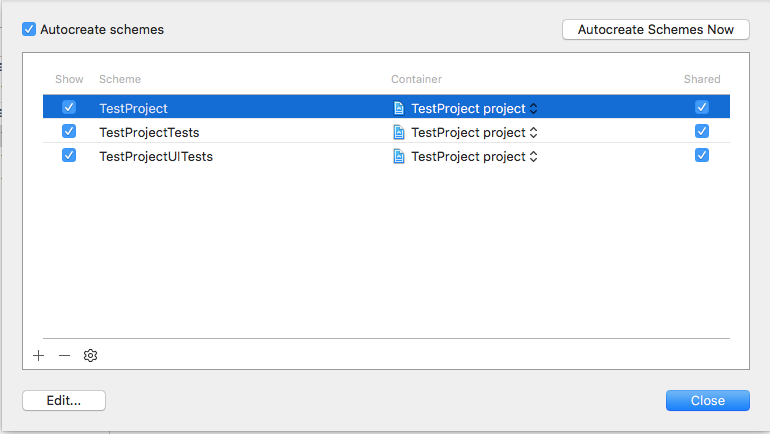 7. Now, we need to initialize fastlane within our project. Open terminal and change directory to your project folder using ‘cd’ command, for example:

8. Once you are in the project folder, type the below command to initialize Fastlane.

During the setup process, it may ask for following

9. Now, a ‘fastlane’ folder gets created in your project directory where you will see certain files like below

In your project directory, you can find the ‘fastlane’ folder as shown here –

Skip this step if you created App IDs during Fastlane initialization.

10. Making sure you are still in the project folder, type in the below command in the terminal.

11. Initialize ‘match’ command to create or get certificates and provisioning profiles from developer portal.

It will ask you to enter the private Git repository, which we created earlier in the first step .

Alternatively, you can even set the environment variable in ‘Fastfile’, so that the development team do not have to enter it manually time and again.

Environment variable that can be used in Fastfile to set passphrase:

12. You will now have one more file added to the ‘fastlane’ folder called ‘Matchfile’.

Open ‘MatchFile’ in text editor and remove everything except the ‘git_url’ and ‘app_identifier’ lines. hange the app identifier to the one that your project has. Save the file.

13. Run the below commands based on your requirements (one command at a time and not all commands are mandatory it depends on the requirement)

Based on your requirement, run the below commands one by one. Remember, not all the commands are mandatory.

14. After executing above commands in the terminal, you would see something like this

Open your project in Xcode and go to ‘Build Settings’. In the ‘Code Signing’ section, click on the arrow beside ‘Provisioning Profiles’ and enter respective Environment variables in the ‘Debug’ and ‘Release’ configurations.

Environment variables should be in the following form: $(sigh_com.enlume.PasswordManager_development)

Installation and configuration of Fastlane is complete. We are now ready to write custom lanes.

Writing custom lanes in Fastlane to do tasks in Fastfile

As discussed earlier, we can write different lanes for unit testing, UI testing, testflight deployment or app store deployment etc. Once you are ready with the lanes in Fastfile, you can push the entire code to your project Git repository.